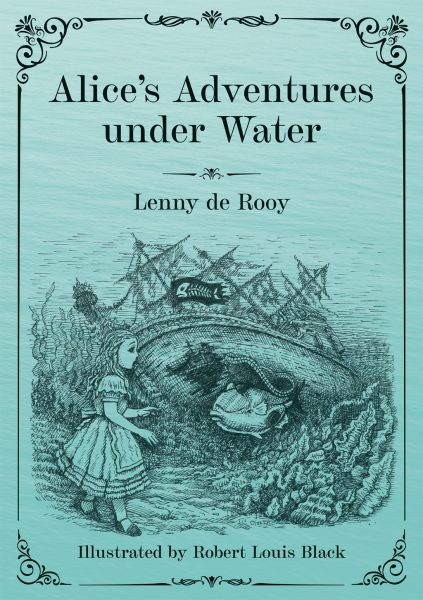 If you enjoyed Lewis Carroll’s books Alice’s Adventures in Wonderland and Through the Looking-Glass and what Alice found there, this is the book for you! Finally, there is a third story in the Alice series – written in Carroll’s familiar style, but packed with a great number of completely new puns, poems, and satire!

This time, Alice explores an under-water world, in which she meets new characters who again make her wonder about their strange logic and behaviour.

The story can be enjoyed by everyone, even those who have never read Carroll’s tales. However, the more familiar you are with them, the more references you will recognize in this exceptionally clever story…

What Inspired You to Write Your Book?
I’ve been interested in the Alice stories ever since I watched Disney’s cartoon movie as a child. As a teenager I started researching the books and found that there is so much more to the stories than first meets the eye. I found it extremely interesting to dive into the author’s background and discover in his writings so many more or less obscure references to people he knew, his personal interests, well-known poetry of the time, politics, and other elements that were prominent in the Victorian era.

Some 23 years ago, I started bundling all my findings on a website: Alice-in-wonderland.net. Nowadays many people consider me to be an expert on the stories. From this point of view, I must admit that I was often a bit disappointed in new sequels, as I always felt something was missing. Either the writing style did not feel very Carrollian, or the story contained little to no poetry, or the puns and jokes were not up to standard, or there were no hidden references. It may be arrogant, but I thought that, even though English is not my native language, with all my background knowledge I surely could do better?

Now I am the first to admit that I am not the greatest plot writer. Crafting a plot with many layers and character development is not my thing. However, when you look at the Alice stories, they don’t really have much of that—it’s Alice entering a dreamworld, walking from scene to scene in which she meets silly characters, and then wakes up. The story’s charm lies in the wonderful, mind boggling encounters she has in a world where a completely different type of logic rules than we are used to. So I feel that a writer of an Alice story should primarily be able to think up silly situations, invent clever jokes, and write poetry—which is something I do feel confident about!

So I have been considering writing my own version for years and I finally felt it was time to give it a try.

Book Sample
“Good day,” Alice said, this time avoiding any introductions. “Can you please tell me why there is a house at the bottom of this lake?”
The Goldfish looked up from its books. “I’m sorry, I’m afraid I cannot. That would be inappropriate. History repeats itself, you know.”
Before Alice could figure out what it meant by that, all of a sudden a majestic and solemn voice came out of nowhere:—

“Once upon a midnight creepy, while I pondered, tired and sleepy,
Over many a dull and tedious recurrence of orbiculate stroll—
While I floated, there was consilience, and suddenly a stroke of brilliance,
Creating strong resilience, happening in my goldfish bowl.
‘Tis a turnaround,’ I fluttered, ‘happening in my goldfish bowl—
There’s more than this, this swimming hole!’

Ah, distinctly I concluded that this water was polluted,
And each separate day I swam here did just break my heart and soul.
Eagerly I wished escaping;—vainly I had tried landscaping,
But no single act of draping had improved my goldfish bowl—
For there was no way to liven up my tiny goldfish bowl—
Forever dull this wretched hole.

But because the glass’s thickness, adding to its very slickness,
Soon I came to the conclusion that I would not reach my goal.
This darn bowl wo’n’t take disjointing, which is surely disappointing;
I can see a prospect daunting: to be jailed without parole—
I’ll forever be unhappy when I’m jailed without parole;—
So unable to drill a hole.

‘Open now!’ I shouted loudly, while my tears rolled down unproudly,
I had no idea my crying would be taking such a toll.
Only recognizing slowly, that the waters rose below me,
And I made it overflow, see! Filling up my goldfish bowl—
Saw the water level rising just above my goldfish bowl—
Escaped, and swam, without a hole!

“Oh,” exclaimed Alice, “so that is why the water is so salty here!”
“Yes,” said the Goldfish. “And it made me King of this lake. Sadly, the Queen Bee took over some time ago. Now all I own is this piece of land around the house.”
“Can you tell me why there is a Queen Bee? What is a bee even doing in a lake?” inquired Alice.
“You’d better ask my gardener,” said the Goldfish. “He’s even more fond of explaining things than I am. You can find him at the back of the house.”
Alice thanked the Goldfish and walked around the house. There she discovered a pretty little garden, although it was full of weeds. The Gardener was busy scribbling things on little wooden signs and sticking them in front of the plants. He looked up from his work when he heard Alice coming.

Author Bio:
Dutchwoman Lenny de Rooy is well-known for her website Alice-in-wonderland.net, on which she gathers background information and analyses of the ‘Alice’ books. She has been maintaining it for almost 25 years and can now be considered an expert on both stories. She participated in the international “Alice in a World of Wonderlands” project, which attempted to make an inventory of all translations ever published, and came out in the year of the 150th anniversary of “Alice’s Adventures in Wonderland”. She also initiated a follow-up of this project: an inventory of all English language editions issued anywhere in the world, which will be published later this year.