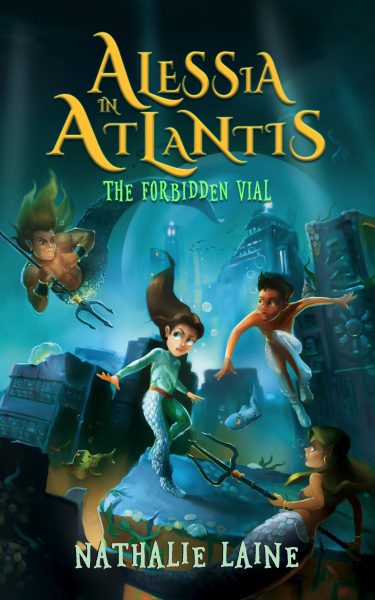 “Imaginative and colorful… a page turner from the very first moment.” – The Children’s Book Review

A riveting new fantasy adventure, perfect for fans of Keeper of the Lost Cities and Percy Jackson and the Olympians.

It’s not unusual for twelve-year-old Alessia to lose control of her emotions and create a scene at school.

It is unusual when one day she’s attacked there by a giant frog monster and plunged into the underwater realm of Atlantis in an overturned boat.

On arriving in Atlantis, she learns that her long-lost father may have been from there. Determined to investigate, she stays and enrolls in Atlantide school: The Octopus’s Garden.

But uncovering the truth is not easy when the tyrannical Atlantide Emperor forbids asking about missing people. With the help of her newfound school friends, Alessia will have to steal evidence from a grumpy teacher, escape from rebel merfolk and make rhymes with menacing blue people of Minch to discover the key to her past.

Meanwhile, someone knows exactly who she’s the daughter of, and is ready to kill her for it.

What Inspired You to Write Your Book?
It came from a random conversation. A stranger (the friend of a friend) mentioned that according to scientists, we actually know less about the depths of the ocean than we do about Mars.

I was hooked. All I could think about for weeks was the possibility of an underwater world none of us know about.

It goes to show, you never know the impact your words might be having on someone!

Author Bio:
Nathalie Laine is a children's fantasy author. She lives a safe distance away from the ocean, in Paris, France, where she works in marketing. She enjoys: poking her finger into the mini whirlpools that form above bath drains, randomly understanding words in a language she doesn't know, wrongly guessing the double-agent in cold war spy stories, sharing a Turkish meal of Lion's milk, fish and turnip juice with her fiancé and friends, and getting spurned by grumpy cats. She may have snuck some of the above into her novel, Alessia in Atlantis: The Forbidden Vial. She is a graduate of the London School of Economics (BSc Management 2010).