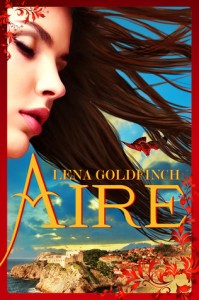 A tale of Legends reborn, royal intrigue, and an unforgettable, heart-melting romance that will sweep you away.

Annalisia is a seer, a princess with a courageous spirit–and a soft spot for Legends.

Jovanni is a Legend, a commoner with no patience for pampered royals.

Principessa Annalisia is stunned and conscience-stricken when an unknown enemy mistakenly abducts her maidservant. Determined to find the girl, Annalisia disguises herself as plain Anna and slips away from the palace. She tracks down Jovanni, her maidservant’s daring older brother, and they soon begin to search together. As they uncover clues, Anna also discovers a kindred spirit in Jovanni. But would he be so free with her if he knew who she really was? Doubtful. Even so, she reveals her secret gift of visions to him, and in so doing disobeys the orders of her beloved grandmother, the queen.

With Jovanni, Anna can almost imagine she’s like any other seventeen year old girl, free to pursue the longings of her heart. When she learns that he also has a secret–he’s a sentinel, an ancient shapeshifter who can take the form of a falcon–it seems as if they were destined to be together, as in the legends of il Sentiro. Though Anna is tempted to wish otherwise, she can’t forget that she’s a princess and it’s her duty to marry another. Meanwhile, their hunt leads Anna ever closer to danger, for she herself is being hunted.

A princess and a commoner.

They never should have fallen in love…but they did.

Targeted Age Group: 12 and up

Author Bio:
LENA GOLDFINCH: I live in a scenic small town in Massachusetts with my husband, two kids, and a very spoiled Black Lab. I write fiction for young adults, mostly light fantasy with a healthy dose of “sigh-worthy” romance. You can visit me online at LenaGoldfinch.com. I love to hear from readers!

What Inspired You to Write Your Book?
The initial idea was a sliver of a scene, a shadowy snapshot of a young woman who has a gift of visions and wants to use it to find a missing person. But she has this gift in a time and place when it’s not accepted and she’s conflicted. She wants to use her gift for good, but she has to prevail against some obstacles to do so. I felt all this conflict and earnestness coming from her and it really drew me to her as a writer–that sense of what is my purpose?

And I could also see this young man who was personally invested in the search. He was driven too, but he had a suspicious bent–he’d been burned before perhaps?–and didn’t initially trust her. I was confident she’d win him over with her sincerity. And they’d fall in love. (I’m a terrible romantic, I’m afraid. ;))

The story morphed and changed over many false starts and revisions, but everything fell into place when I decided to make it an out-and-out fantasy (and not a historical with some supernatural elements). It was like I was set free. I could do whatever I wanted. The guy could have a special, supernatural ability of his own! And so Jovanni became a sentinel, a being who could take the form of a falcon, which I thought was so cool.

As far as the era, my research zeroed in on ancient Italy and Turkey. I can’t say precisely why except that I followed my fascinations and that’s where I arrived. I loved the warm Mediterranean climate and the sea as a character, but also the sister cities that rose up as part of my world-building, the city-states of Isalla, Boroth, and Jeraan, the remote Mont Vineao, and the common enemy, Cardia, the birthplace of the heroine’s mother. I was also fascinated by the era of silence between the Old & New Testaments of the Bible. That sparked an idea: what would it be like to have a gift in a time when there were no more gifts (or special revelations)? This could be the obstacle my heroine was facing. Her gift has become a legend, something she could possibly be banished for if she claimed it before her people. So her grandmother, the queen, has forbidden her to reveal her gift, and she loves her grandmother very much and wants to please her, but then a girl is mistakenly abducted in Annalisia’s place (her maidservant). This is when I felt Anna’s conflicting emotions begin to boil.