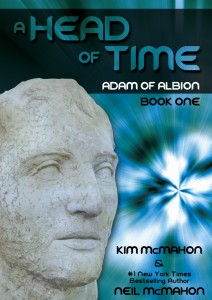 Start with a few typical, ordinary teenagers.
Sure. As if there’s any such thing.
The lineup:
Adam Keane, 14, ranch kid from hardscrabble Albion, Montana; sweet and shy, but tough as nails, who’s never owned an X-box but can fix an engine or shoot an elk, and right now is a fish out of water as he visits rich relatives in England.
Artemis Wellington-Blackthorn, 13, British aristocrat, petite, brash, brilliant, wild-haired feminist Goth, steeped in ancient lore and Goddess worship.
And Orpheus, way older than the Pyramids, but a kid at heart–although technically, he doesn’t have one of those, because he’s a head. Literally. A miniature man’s head, who’s actually a cyborg super computer, created by an advanced civilization that sank beneath the sea in pre-historical times.
Throw the three of them together, with a gang of murderous, trigger-happy thugs hot on their trail, determined to steal Orpheus at any cost. Add in Orph’s ultra-genius ability to function as a time machine. Plunge them careening back through centuries to the wild, dangerous Third Crusade, where they land smack in the middle of a brawl between King Richard the Lionheart, the Sultan Saladin, the Knights Templar, and a secret cult of female Assassins.
The result? An irresistible, thrilling adventure that’s a blend of fantasy, science fiction, magic, and history–
And also the story of a passionate love that has burned for many thousands of years.
Above all, ADAM OF ALBION is wonderful fun.
We hope you’ll take this chance to adventure along with these two terrific teens–and the one and only Orpheus. (If you thought your older brother could be a pain, wait until you meet him.) He’s human in all the ways that matter–cantankerous, sly, smartmouthed, but warm and generous underneath; a little wacky, but the kind of friend who comes through when you need him; and he loves to talk, mostly about his countless hair-raising adventures as he roamed the globe, living by his wits. He claims that he’s known pretty much every important person in history and has been at every important event, and he’s not shy about bragging on it–although his stories sometimes do seem to stretch the truth.
And Orpheus is human in the most important way of all:
He’s in love. But it’s a love that’s troubled by grief, worry, and loneliness. His soul mate, Eurydice–a beautiful, glowing, ankh-shaped jewel who fit inside his skull, who was part of him since his creation–got stolen from him during the Third Crusade.
Worse still, she’s his energy source. He’s been running on empty since he lost her, and now even empty is almost gone.
If he doesn’t find her soon–he’ll die.
As Orph and the kids search the Holy Land desperately for Eurydice, fighting and scheming to stay alive among the violent knights, fierce Muslim warriors, and treachery that lurks like vipers under every rock, another facet of this complex story emerges–the world of magic enters in.
Artemis and Adam begin to learn that they are chosen, with destinies that reach far into the past and future both. This adventure is really a battle in a hidden cosmic war, and they will play a key role in its outcome, as soldiers being guided by the mysterious hand of the Goddess.
But victory is far from certain, and the next stage of their journey will depend on their brains and courage in this one–if they survive.

Author Bio:
Kim Anderson McMahon has spent most of her life in Missoula, Montana, except for a 15-year adventure in New York City. She has worked in publishing and as a journalist, and is currently the associate director of Humanities Montana, coordinating the annual Montana Festival of the Book, along with grants and programs. ADAM OF ALBION (co-authored with her husband, Neil McMahon) is her first novel. They’re at work on the second book in the A HEAD OF TIME series, ARTEMIS AT THE HUNT.
Neil McMahon has published a dozen thrillers, including (co-authored with James Patterson) the #1 NY Times bestseller TOYS. He holds a degree in psychology from Stanford, and is a journeyman carpenter, with many years spent working construction. ADAM OF ALBION, written together with his wife Kim, is his first young adult novel. He loved it, and is now happily addicted to the genre.

What Inspired You to Write Your Book?
One evening back in the early 1990’s, for no reason I can pin down, Orpheus and Eurydice appeared in my mind. I’d done a lot of research on the Knights Templar (my fascination with them started long before The DaVinci Code), who were said to have worshiped a miraculous head that talked; maybe it stemmed from that, via some murky subconscious pathway.
I loved the idea, and immediately started writing a story about it–basically similar to what’s now ADAM OF ALBION, but much rougher and less appealing. I ended up setting it aside. I didn’t have any clear vision of how to improve it, and my writing career took a different turn, into mainstream thrillers. Trying to keep up with those was all I could handle.
Then–about fifteen years later–my wondrous wife Kim was cleaning out a desk and found an early draft of what I’d written. She saw possibilities that I never would have dreamed of (in other words, she brought in all the smart stuff that’s now in the book). Busy as she is, including a demanding full time job, she went to work and wrote a new version.
When I read it, I knew that we really had something. Over the next few years, we rewrote and polished it several times. Finally, in June, 2012, we decided it was ready for the ultimate test–to publish it and let readers be the judge.
Of the dozen novels I’ve authored or co-authored (including the NY Times bestseller TOYS, with James Patterson), ADAM has been far and away the most fun. Working with Kim is a joy. By now, we feel like Artemis and Adam are our own kids–and Orpheus is so much a part of us that we can see and hear him as clearly as if he’s perched on our shoulder, yakking away.
Kim and I both care deeply about this book. While our primary goal is to entertain, and we’ve done our best to keep the story exciting and often humorous, we’ve also touched on more serious ideas, trying to give it the extra dimension that truly good fiction must have.
We’re working hard on Book Two–ARTEMIS AT THE HUNT–and plan on more to come.