You are here: Home / A Purple and Gold Afghan and other stories by Jordan Smith 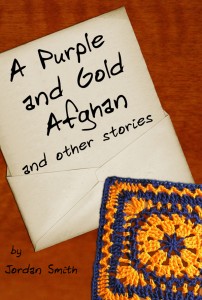 About the last thing shy and lonely Joseph wanted to do was live on campus at seminary. But when he finds a beautiful afghan on his dorm room bed and attempts to track down its maker, Joseph runs headlong into a series of events that might just lead to something called… love.

Charming, whimsical, and poignantly funny, A Purple and Gold Afghan and other stories is a delightful collection that will tug at your heartstrings.

Author Bio:
Jordan Smith is a storyteller who generally works in the realm of film, though he often branches out into other forms of narrative fiction. He’s always picking stories apart to see what makes them tick. He is the author of Finding the Core of Your Story and A Purple and Gold Afghan and other stories, and the producer/director of the Month of the Novel web series. Jordan blogs about all manner of story-related things at FixMyStory.com and tweets regularly as @Malfhok.

What Inspired You to Write Your Book?
A Purple and Gold Afghan is a collection of short stories that I wrote as I began a season of courtship. During the first several months, there were many thoughts and feelings to explore. Those all came out into the three stories in the book.